*I was given a free copy of this book in return for an honest review. All thoughts are my own. I was not paid by the publisher or the author for my review.* 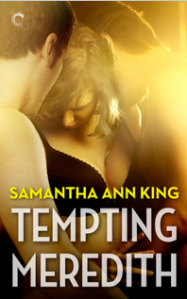 Before you start this book, I recommend that you go get yourself a glass of ice water. Actually. That’s not a recommendation. Just go get it. You can thank me later.

Tempting Meredith was scorching. I’m sure my face turned bright red whenever a family member walked into the room while I was reading. I’ve never read anything by Samantha King before today. I’m rather upset with myself for not discovering her before now. I loved her writing style.

The relationship between the main characters is a ménage. Two men, Charlie and Blaine, and Meredith. This isn’t the first ménage book I’ve read, and it definitely won’t be the last…but I think it was by far the hottest. I needed that glass of ice water to cool myself down more than once during the book.

Meredith is wickedly smart. She’s in her late twenties (twenty seven if I’m remembering right) and she’s a Ph.D. She doesn’t like not being in control, and she’s rather awkward sometimes in social situations. If she doesn’t like something, she’s vocal about it, same goes for the opposite.

Meredith and Charlie meet at a gun range. Strange, right? She’s taking shooting lessons (for self protection) and he’s one of the instructors. I loved Charlie. Loved loved loved him. He’s quick to smile and has a wonderful sense of humor. When Meredith disagrees with him or decides to drive her own car separately when they go out to dinner, he tries to get her to ride with him, but ultimately leaves the decision up to her.

I also really loved Blaine. He was flawed and hiding who he really was, but I just loved him. He knew that he’d made a mistake with Meredith when they were in college years before, but had no way of finding her after. When they meet again through Charlie, they’re able to eventually work through their past so that they can move onto their future.

Blaine’s sister annoyed the hell out of me with her reactions to their relationship. She was fine when she thought Meredith was only with Charlie, but once she started guessing that there was more to the relationship between the three of them, she was unsupportive and mean. I can understand that she might not like or understand the relationship, but it wasn’t her relationship. I don’t know, I just didn’t like her much.

I LOVED Meredith’s family though. Her sister and brother-in-law were hilarious together, and everyone was supportive of Meredith’s relationship. I loved that. They had such an open mind for different kinds of love.

Both Meredith and Blaine are hiding things from themselves and from everyone else for most of the book. I won’t go into what all of that is, because I don’t want to spoil everything.

I had so much fun reading this book. I really, really enjoyed Samantha’s writing style…and loved her ability to bring Meredith, Blaine and Charlie to life in such a way that if they were real people, I could probably (maybe) pick them out on the street. I’ll be looking for more work by Samantha and I can’t wait to see what she comes out with next.

One thought on “Tempting Meredith” 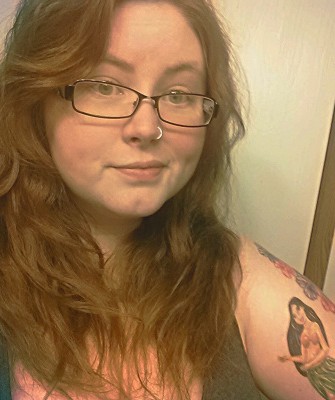 If you have a book you think I should read, leave it in the comments section (Author and Title) and I'll give it a try.

You can also send me an email at:
travelingcal@gmail.com

Have a great day! Thank you for stopping by. :)